From vehicle monitoring club to global partner for a safer world 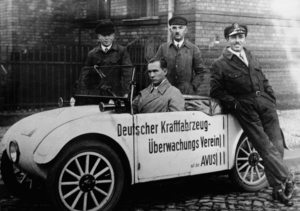 Over 35,000 employees in 50 countries on every continent On a “safety mission” for nine decades: expert organisation DEKRA celebrates its 90th anniversary this year. On 30 June, 1925, the German Motor Vehicle Surveillance Association (Deutsche Kraftfahrzeug-Überwachungs-Verein e.V., or DEKRA) was registered at the Berlin-Mitte district court. 90 years later, it has become one of the world's leading expert organisations. Over 35,000 employees are active in 50 countries on every continent. Carrying out 26 million vehicle inspections per year, DEKRA is by far the global number one. To this day, DEKRA e.V. and its subsidiaries remain as committed to traffic and plant safety as they were in 1925, when the founding fathers established this in the statute as the association’s purpose. In comparison to those early years, the company now understands its safety mission in an even more extensive and international manner. “As a globally active expert organisation, we work worldwide to ensure safety in traffic, in the workplace, and at home," says Stefan Kölbl, Chairman of the Management Board for DEKRA e.V. and DEKRA SE. “Our vision for the year 2025 is to become a global partner for a safer world.”

At the beginning of the 20th century, industrialist Hugo Stinnes and other figures from the German economy recognise the safety challenges arising from rapid motorisation. Together they develop the idea of ​offering voluntary technical inspections of motor vehicles. This idea leads to the founding of DEKRA. DEKRA’s mission is clearly formulated in the company’s statute: “The purpose of this association is the [...] operational safety and road safety of motor vehicles [...], the same with regard to other equipment and devices, and research to support and promote these areas.”

The idea rapidly prevails. Companies and public institutions with in-house fleets join the association. Acting as an expert partner, DEKRA ensures the safety and reliability of vehicles on the road. At the beginning of the 1930s, DEKRA has approximately 80 sites with test centres.

Rebuilding in the postwar period

After the Second World War, in 1946 the company starts the process of rebuilding from Stuttgart. The number of branches and test centres grows rapidly. Soon, DEKRA is represented throughout the Federal Republic of Germany. The focus is initially on testing commercial vehicles and fleets, especially those of the association’s own members.

In 1960, the general vehicle roadworthiness test (Hauptuntersuchung) is introduced in its present form, and inspection tags are introduced to licence plates. Around this time, DEKRA also receives recognition as a monitoring organisation. Since then, DEKRA’s experts have also tested private cars, and have made a significant ongoing contribution to road safety. Since the end of the 1970s, DEKRA’s experts have also carried out general vehicle roadworthiness tests in vehicle workshops.

The DEKRA Academy is also founded in the 1970s. Over the following decades, these initial training sessions for professional drivers develop into one of the largest private educational companies in Germany. Today, the DEKRA Academy trains and qualifies more than 100,000 people a year in 150 different locations throughout Germany.

Internationalisation and expansion to the east

DEKRA’s internationalisation begins at the end of the 1980s when it expands into France: for the first time, it offers vehicle inspections in a neighbouring European country.

Shortly thereafter, with the fall of the Berlin Wall and the reunification of Germany, the company faces a great challenge: Before the first free elections in the GDR on 1 July 1990, DEKRA is commissioned to establish a technical test centre in East Germany. Within a very short time, it establishes a nationwide network of branches, and it continues as the market leader today. The first tests take place in tents, however they are equipped with the latest technology. As early as October 1991, the one millionth inspection tag is awarded in the East. As a technical test centre, DEKRA is also responsible for driving licence tests in the eastern German states: by mid-2014, DEKRA examiners in the eastern German federal states have carried out 10 million driving tests. As DEKRA is celebrating its 90th anniversary, it is simultaneously celebrating a different anniversary: 25 years of technical testing in eastern Germany.

In 1990, a new legal framework is created to cope with the challenges of the future: the newly founded DEKRA AG takes over the operational activities of DEKRA e.V.

In the 1990s, DEKRA has a worldwide presence through its sponsorship of Michael Schumacher in Formula One. At the same time, the company's internationalisation continues: its presence in Europe is strengthened through shareholdings in the Czech Republic, Poland and Russia, and later also in Slovakia, Hungary and Italy. By the end of the decade, DEKRA will be present in most EU countries, offering vehicle inspections, expert reports, claims settlement and quality assurance.

In 1998, as a subsidiary of the DEKRA Academy, DEKRA Arbeit expands its range of services to include the promising field of temporary employment. Today, the DEKRA Arbeit Group, with over 120 locations in Europe, is a leading organisation in the field of personnel services.

After the year 2000, the company strengthens its position in terms of technology: The state-of-the-art DEKRA Automobile Test Centre (DATC) opens at the Eurospeedway Lausitz in 2003. Together with the DEKRA Accident Research Centre founded in 1978 and the DEKRA Crash Test Centre in Neumünster, it bundles the company’s competences for customers from the automotive industry.

DEKRA raises awareness of its brand through sponsorship: it has been a technical partner of the DTM since 1989, and an official partner of DFB referees since 2003. At the same time, the company underlines its position as a neutral, independent third party in ensuring safety and fair play.

At the beginning of the new millennium, DEKRA also strategically expands its industrial testing services: following the acquisition of NORISKO (a leading industrial testing service provider in France) in 2005, this results in the launching of a separate business unit. In 2010, DEKRA AG assumes the legal form of a "Societas Europaea" (SE). This goes hand-in-hand with the acceleration of its international activities. Further acquisitions in the automotive and industrial sectors follow, including in Brazil and Sweden. In 2011, the new DEKRA HAUS opens in Shanghai. In the same year, DEKRA takes over the French AutoContact Group and strengthens its international position in used vehicle management.

With its acquisition of British explosion prevention company Chilworth (2011) and US specialists in behaviour-oriented process and organisational security BST (2012), DEKRA significantly expands its position as a provider of security consulting. Today, Chilworth and BST's consulting services are bundled together with RCI Safety in the DEKRA Insight unit. RCI Safety specialises in software solutions for occupational health and safety.

In 2013, the Group takes over Vehicle Testing New Zealand (VTNZ), further expanding its international vehicle testing operations. In South Africa, DEKRA strengthens its offer in the industrial segment with the purchase of Raysonics, the market leader in non-destructive material testing. The group expands its services for the rail industry in 2014 by acquiring the Dutch company Plurel B.V. DEKRA Rail in the Netherlands and Germany is now one of the market leaders in the testing, inspection and certification of rail vehicles in Europe.

Global partner for a safer world

In its anniversary year, DEKRA’s service portfolio ranges from vehicle inspections and expert opinions to used car management, claims settlement, industrial and construction auditing, security consulting, as well as the testing and certification of products and systems, to training courses and temporary employment.

For its 90th anniversary, DEKRA has clearly positioned itself for the future, says Managing Director Stefan Kölbl: “Safety is a central need of every human being. And we know that accidents can be avoided – in traffic, in the workplace, and at home. Thus, our vision for the year 2025 is true to the mandate from our founding statute, both today and tomorrow: we want to become a global partner for a safer world.” 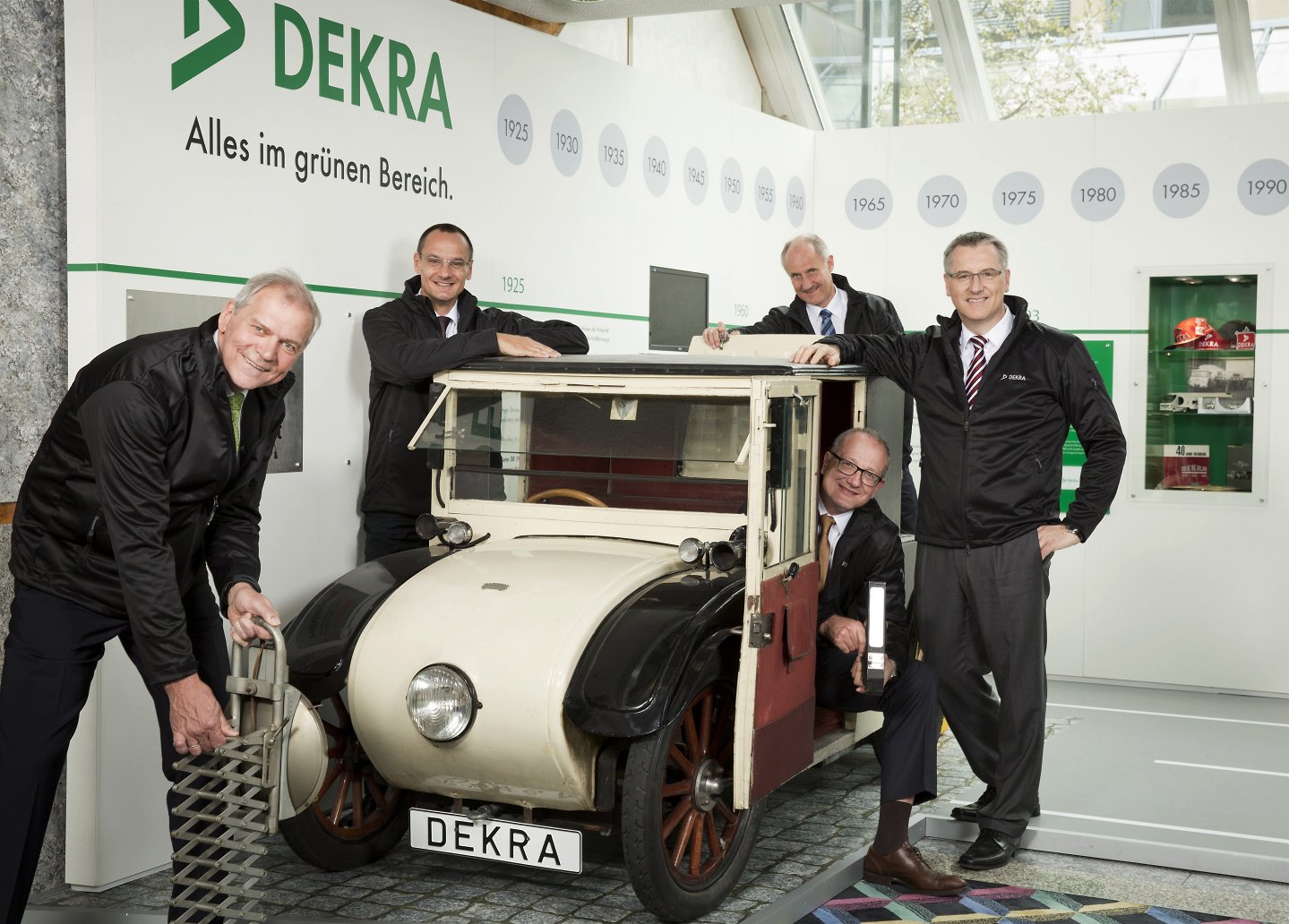 The DEKRA SE board in its anniversary year: (from left) Clemens Klinke, Jörg Mannsperger, Roland Gerdon (back), Ivo Rauh, Stefan Kölbl (Chair) with the Hanomag 2/10 PS, nicknamed “Kommissbrot”. DEKRA’s first engineers used vehicles like this to visit their members and test their vehicles for their safety.