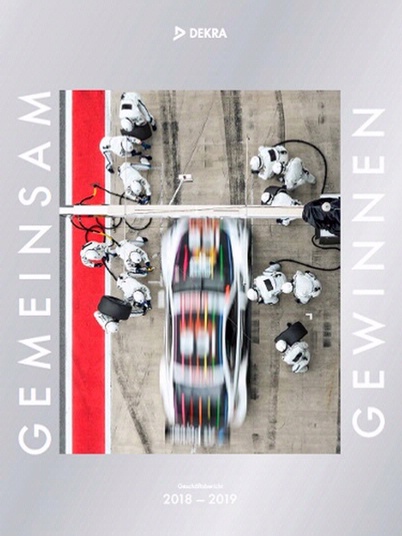 On the offensive for improved digital security

Globally active expert organisation DEKRA has enjoyed a successful start to 2019. In the first quarter, sales increased by almost five percent to more than 800 million euros. The company is on track to grow for the 16th consecutive year, and expects to post a year-on-year increase of between four and six percent. The highlights of the first months of the fiscal year included the opening of DEKRA’s first test centre in China, and the launch of the Trust Centre initiative. In collaboration with other testing organisations, DEKRA has launched this initiative to benefit the entire industry. Its aim is to enable testing organisations to effectively fulfil statutory audit tasks in the data-driven and networked world of the future. This applies in particular to secure mobility. “Data belongs to the users. Vehicles generate safety and environmental data, and this data must be available to testing organisations in unfiltered form, otherwise we cannot guarantee the proper safety and roadworthiness of vehicles”, DEKRA CEO Stefan Kölbl told reporters in Stuttgart. Glancing in the rear-view mirror, DEKRA’s CEO has every reason to be satisfied: in 2018, consolidated sales increased by 6.6 percent to 3.3 billion euros. The number of employees increased by over 1,000 to almost 45,200. International business continued to develop positively, reaching 1.3 billion euros. More than half of the workforce is employed outside Germany. In 2018, DEKRA was able to further expand its position as the largest non-listed expert organisation in the TIC sector (testing, inspection, certification).

After intensive preparation, DEKRA opened its first test centre for private cars in Shenzhen, China, just a few weeks ago. A second test centre is under construction in Beijing, and is scheduled to open in the second half of the year. As a global market leader in vehicle testing, the expert organisation is also a pioneer in the world's largest automotive market. “We are pursuing ambitious goals in the People's Republic of China,” said Stefan Kölbl. “Entering this market is a milestone for us, and if things go according to plan, we will continue to invest heavily over the next few years.” Vehicle inspections in China are organised through the division of tasks, and also make partial use of data-based and automated processes. As a result, the Shenzen centre can test around 20 vehicles per hour, compared to three to four in Germany. This means that the Shenzhen centre has a capacity of 50,000 vehicles per year. The Beijing centre will be even bigger, offering annual testing capacity for up to 180,000 vehicles including trucks and buses. Kölbl: “Here, we are building the largest DEKRA test centre in the world.”

In DEKRA’s opinion, China is demonstrating the direction in which vehicle testing is headed. “The roadworthiness test of the future, HU 4.0, will be data-driven,” explained the DEKRA CEO. “This opens up the opportunity of the century to improve traffic safety, but testing organisations like DEKRA will need unfiltered access to the data generated by automated and networked vehicle driving.” But at the moment, this data is only available to the manufacturers. For this reason, DEKRA has launched the Trust Centre initiative in collaboration with other testing organisations. Vehicle data will be stored in trust on a platform independent from the manufacturers, and will be forwarded to testing organisations in accordance with clearly defined criteria. “We have to be able to carry out independent checks of all vehicle systems relating to safety and the environment over the vehicle’s entire life cycle, so we can check for damage, malfunctions and manipulations”, is how Kölbl justifies the initiative. “In the future, especially after traffic accidents and traffic violations, it will become increasingly important to clarify the causes and where the responsibility lies. Unfiltered data access is an absolute prerequisite for this.”

Digitisation of services and processes:

In the financial year 2018, the digitisation of DEKRA’s own services and processes was also high on its global agenda. In New Zealand, the INSPEKT digital inspection platform was developed and launched at around 200 sites throughout the country. In Germany, DEKRA Digital GmbH is working on the DEKRA S@fety Index, an app that analyses driving behaviour and thus improves traffic safety.

The app is currently being tested in Hanover by the newly founded mobility service provider, MOIA. The VW subsidiary offers so-called “ride pooling”: an algorithm bundles passengers' bookings into ideal routes, thus relieving inner-city traffic. “We are MOIA’s exclusive partners, and have recruited and trained the drivers", explains DEKRA CEO Kölbl. In addition, DEKRA is responsible for maintaining the operation’s 50 shuttle buses, and for drawing up the deployment plans. “Thanks to our know-how in the automotive, personnel services and training and qualification fields, our partnership with MOIA promises to be mutually beneficial”, says Kölbl. “MOIA is an example of how we can bundle different competences – also data-driven – into complete packages and thereby open up growth opportunities.”

DEKRA’s international testing network aims to provide a comprehensive range of services for automated and networked driving. At the Lausitzring, Europe's largest manufacturer-independent test track for automated and networked driving, DEKRA and Deutsche Telekom will soon be offering the automotive industry a test field based on 5G technology; 5G tests are already taking place in collaboration with Telefónica at their test site in Malaga. At the Lausitzring, various scenarios of networked communication between vehicles and their surroundings will be tested. In addition, due to high demand the DEKRA Technology Centre in Klettwitz, the company is currently spending millions on expanding its laboratory at the Lausitzring site. From autumn onwards, the state-of-the-art exhaust emissions tester will offer double the capacity – and it is already heavily booked up.

DEKRA pushed ahead with its international expansion in vehicle testing last year, and not only in China. Following the acquisition of a regional provider, the expert organisation is now also represented in Denmark. In addition, it opened new test centres throughout Europe in countries such as Sweden, Bulgaria, Austria, Slovakia and the Czech Republic. DEKRA also strengthened its position in North America by acquiring 24 Jiffy Smog exhaust emission test centres in Nevada, USA. DEKRA is now represented in six US states.

In the UK, DEKRA acquired Gain Solutions, a specialist in vehicle health checks and fleet management. In South America, DEKRA opened five test centres in São Paulo in Brazil which also offer fleet management services. It also further expanded its business relationship with the PSA Group (Peugeot-Citroën): following PSA’s takeover of Opel, DEKRA is now supporting the PSA Group with the returns process of over 200,000 fleet vehicles per year, covering all the group’s brands in ten European countries.

Overall, DEKRA has further consolidated its position as the market leader with 26 million vehicle inspections worldwide. DEKRA is also a leader in vehicle testing in Germany, carrying out around eleven million tests annually and enjoying a market share of 33 percent.

Industry-related services on an expansion course

Thanks to further globalisation and DEKRA’s good position in future-oriented fields, DEKRA has also been able to expand its operations in industry-related services. Kölbl: “Our international expansion has been characterised by strategic acquisitions and the targeted expansion of our expertise.” The acquisition of the Dutch Industrial Safety Group has improved its position as a security adviser to oil & gas, chemical and pharmaceutical companies. The Industrial Safety Group employs approximately 100 specialists in occupational health and safety, fire protection, and health promotion who provide support to multinational industrial companies in construction and assembly projects, change processes and maintenance shutdowns. In response to market needs, DEKRA has opened a laboratory in Shanghai dedicated specifically to the testing of chemical reaction hazards (CRHs). This new laboratory means that DEKRA is now represented on three continents in this field. Furthermore, DEKRA has been recognised in Japan as a certification body for the testing of products used in potentially explosive atmospheres.

DEKRA has also further improved its expertise and acceptance in the market for product audits and certifications. It is now also providing product certification support to medical device companies in accordance with the Medical Device Single Audit Programme (MSDAP) standard. This certification is important, for example, in ensuring access to major markets in Australia, Japan, Brazil, Canada and the USA. DEKRA has also a new laboratory in China dedicated specifically to the testing of WiFi connections. “Thanks to our global presence, we were able to win more customers in 2018,” says Stefan Kölbl. “Today we are present in all important markets, from medical technology, energy infrastructure and systems, to e-mobility and network technology.”

Until now, the positive economic situation in Germany and many European countries has also boosted business in the segments of training and temporary work; both fields have grown and have succeeded in expanding their market position. As one of the largest providers of private education in Germany, the Training business unit was able to significantly increase user numbers on the DEKRA Safety Web, its digital training portal for occupational health and safety. The portal’s initial content has also been adapted internationally. Thanks to DEKRA’s new software “DEKRA Tag.it”, users can now also use smartphones and tablets to retrieve site-specific content on hazardous situations and specific security measures for each employee. Since 2016, DEKRA has been supporting the integration of refugees nationwide through the provision of language and integration courses. In cooperation with the German Federal Employment Agency, job centres and businesses, DEKRA is helping to equip refugees with professional qualifications. In order to tackle the shortage of skilled workers in Germany, especially in the healthcare industry, but also in IT, DEKRA is now training employees from south-eastern Europe for jobs with more than 70 customers. They receive professional and linguistic training, and then come to Germany with the firm promise of a job. There are currently over 3,000 participants in the Expert Migration Programme. In 2018, around 1,300 nurses were placed in hospitals and care facilities throughout Germany.

The temporary employment business unit has further consolidated its position among Germany’s largest providers of personnel services, and is now ranked sixth nationally (previously seventh). In addition to the German market, the focus continues to be on international expansion. After launching in France and Austria in 2018, DEKRA now offers temporary employment services in 17 countries. This year additional foreign launches are planned.

A positive outlook for 2019

In 2018, DEKRA laid the foundations for another successful year in 2019. It hopes to continue its growth for the 16th consecutive year, despite increasingly challenging global economic conditions. “The global megatrend of security is fundamentally still intact. As an innovative international provider of solutions, DEKRA will benefit from this by providing greater security for both traditional and digital markets”, says DEKRA’s CEO Stefan Kölbl. “At the beginning of the year we launched our new corporate structure with eight service divisions and eight regions. This will allow us to strengthen our customer focus, provide more comprehensive solutions worldwide, and leverage our digitisation capabilities.”